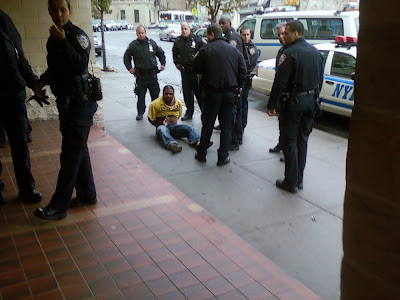 We know it all too well:


or CPR as the acronym stands out in BOLD RED LETTERS along all police vehicles.

This past Sunday, October 18th, 2009 at approximately 3:00PM I was witness to what can only be called police brutality and New York’s Not so Finest in action in front of 3103 Third Avenue between East 158th and East 159th Street in front of the entrance to the residential building. I was inside the South Bronx Food Co-op (SBxFC) when I heard a commotion and yelling and when I looked out the door I saw 4 police officers holding a man with his hands cuffed behind his back and then they proceeded to thrown him down on the floor, face down and as if that was not enough then they bashed his face against the pavement. 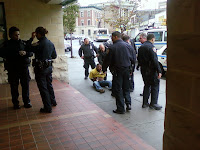 But it doesn’t end there.  One of the police officers then proceeded to kick the male suspect on his back and looked up and glanced around as if to see if there was anyone watching and proceeded to deliver yet another blow to the suspect’s back.  At that point I had already mentioned to fellow SBxFC worker, Lily Acunzo, what was happening and I walked out and began
taking pictures of the cops and the suspect with his bloody face.  That was when some of the cops directed their anger towards me.  As Lily who had the door open and was witnessing what was going on said, “I remember him (the police officer) coming up into your face (and a woman cop too) and they said and yelled at you “Do you have a problem? Do you have a problem? We will take away your phone! Get out of here!” “He came too close for it to be just a cop warning to stay away. It was a challenge, especially because he was taller than you and so close.” 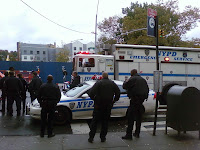 Said police officer literally charged towards me angrily and I have never felt so intimidated and afraid of a police officer – mind you I am always thanking police officers for putting their lives on the line for our safety and I also have family members who are officers of the law as well and have always had great respect and admiration for New York’s “Finest” but as with all groups there is bound to be a bad apple or two and it is these who sully the name for the rest who truly do not get “high” on the power and adrenalin rush that they feel. 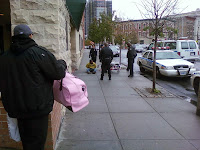 So what exactly prompted the cops to react the way that they did towards the suspect and myself?  The officer who charged angrily towards me was apparently attacked by the suspect who tried to grab the officer by the neck.  The officer also claimed that the suspect tried to take his gun.  I cannot verify this as fact because I did not see any of that but the officer did appear to be shaken up and I could see some marks on his neck. Now me being rational and always playing devil’s advocate said to myself ok so the officer was apparently attacked but the other police officers were able to subdue the suspect, cuff him and from what I saw at that point he was no longer a threat.  The suspect did not thrash about or anything but now that I knew that part of the story now I saw why the cops proceeded to beat this man – vengeance.  There is no other word that I can use to justify the actions of the officers involved. 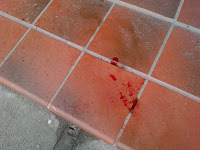 After the 7 of the 9 police vehicles on the scene left along with the 2 ambulances (7 regular patrol cars, 1 van and 1 truck) a woman walked out of the building crying hysterically, “What happened, what happened, where is my boyfriend, is he ok??”  I approached the woman and asked her what had exactly happened.  She said that she had called 911 because her boyfriend, who apparently suffers from a history of mental illness, had “gone crazy” on her and was threatening her with a knife.  She said he ran out of the apartment with the knife but it was unclear to her or myself if the suspect had threatened the officer with the knife or if he even had it when he left the building.  I personally did not hear a clang of a knife falling down or did I see a knife on the ground upon closer inspection of the scene. 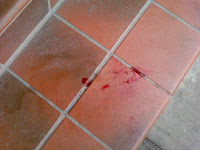 The fact remains that given the circumstances of the suspect’s alleged history of mental illness and that he allegedly attempted to grab a police officer by the neck and grab his gun, once he was handcuffed and subdued there was no need for violence and the vicious bashing of the suspect’s face on the pavement by the officer as well as the other officer who proceeded to kick him on his back.  At one point when the officer sat the suspect down an officer whacked twice on the back of his head and pulled his hair.


I encourage each and every one of the readers here to visit Flex Your Rights and subscribe to their mailing list for access to their HIGHLY informative website about your rights – OUR RIGHTS when confronted by police officers.  George Brunner, a Facebook friend and associate who is currently attending George Washington University in DC as a Political Science Major provided this link to all on his wall on Facebook and his timing could not have been more perfect.


Here is a little more information on Flex Your Rights courtesy of their website:

Flex Your Rights (FYR), a 501(c)(3) educational nonprofit, was launched in 2002. Our mission is to educate the public about how basic Bill of Rights protections apply during encounters with law enforcement. To accomplish this, we create and distribute the most compelling, comprehensive and trustworthy know-your-rights media available.

The founder, Steven Silverman, was previously a campus organizer for the campaign to repeal the Higher Education Act’s aid-elimination penalty. The law blocks financial aid to low-income students reporting drug convictions. As part of his work, Silverman prompted students to describe the details of the police stops and searches leading to their minor drug arrests.

A disturbing pattern emerged, and various legal and law enforcement experts confirmed his conclusion: The vast majority of people are mystified by the basic rules of search and seizure and due process of law. Consequentially, they’re likely to be tricked or intimidated by police into waiving their constitutional rights, resulting in a greater likelihood of regrettable outcomes.

The sum of these outcomes flow into all major criminal justice problems — including racial and class disparities in search, arrest, sentencing and incarceration rates.

After my encounter on Sunday, I am glad that this resource is available to me, my friends, family and loved ones so make sure to pass this information along to all your loved ones so that they too may be armed with our basic Bill of Rights and be educated on them.

Poetry Jam @ PeaceLove - ALL ARE WELCOME TO PARTICIPATE