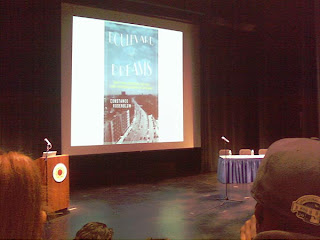 On Thursday, November 12th I had the privelage of attending Boulevard of Dreams Book Talk and Dramatic Reading at Hostos Community College.  The book, Boulevard of Dreams, Heady Times, Heartbreak, And Hope Along The Grand Concourse In The Bronx is the work of Constance Rosenblum, editor of The New York Times City section as well author of the beloved Habitats articles of the Sunday Times Real Estate Section.


After formal introductions by Lucinda Zoe, Interim Provost & Vice-President for Academic Affairs, Felix Matos Rodriguez, President, Hostos Community College and Sam Goodman, Urban Planner, Bronx Borough President’s Office, Ms. Rosenblum took us on the journey of both the project of writing such a book as well as the tale of the Grand Concourse from its early years to the present day.  According to her when she first wanted to publish the book in the early 1980’s she was rebuffed by publishing houses who essentially said that, “…no one wants to read about The Bronx”.  Although she would have wanted the book published then, Ms Rosenblum has embraced the appropriateness that Boulevard of Dreams has been published now during both the 100th anniversary of our Grand Boulevard and Concourse as well as the rebirth of The Bronx. 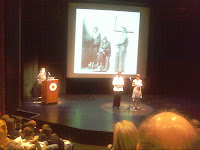 During her talk, Ms. Rosenblum introduced Hostos students Salonia Cook and Ebony Ross who both beautifully read an excerpt from the introduction of the book which describes what was known as The Bronx Slave Market along The Concourse.  Ms. Cook and Ms Ross brought to life in such vivid detail with their readings of that particularly dreary period of the Concourse of African American men and women lining the streets, as modern day-laborers would, waiting for the Jewish women who would look for labor to clean their stately apartments along the Grand Concourse all for meager wages.  These conditions were brought to light thanks to, “…Marvel Cooke a black investigative reporter who went undercover to describe its operations for the Crisis, a publication of the National Association for the Advancement of Colored People…”, Ms. Rosenblum writes. 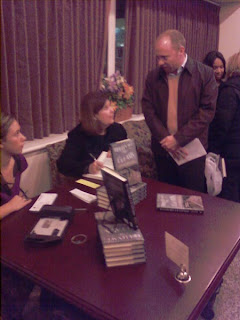 The evening ended with a brief Q & A session between the audience and Ms Rosenblum followed by a small reception where she autographed her book for the audience.


Welcome to Melrose highly recommends this book to both the lovers of The Bronx and to those not so fond of our great borough to the North or as we were referred to in yesteryears past – The Great Northside for it beautifully chronicles the history, struggles, dreams, sorrows, hope of The Grand Concourse which resonates throughout generations of families and people who lived on or in its shadow.


A big Melrose THANK YOU is in order for Constance Rosenblum for writing such a wonderful book and showing her love for our great borough and our stories to be told and also for William Casari, MLS, College Archivist and Instruction Librarian at Hostos who tirelessly put together this wonderful presentation as well as getting a thank you from Ms Rosenblum in the book itself.

Pet of the Day

Pictures of the Day