Folks woke up today to the news of the passing of the legendary David Bowie this morning in Manhattan surrounded by his family.

The transcendental icon once performed in The Bronx at the former Jimmy’s Bronx Cafe back on October 17th, 2002 as part of a 5 borough Heathen tour he did here in his home city of NYC and across the world. Although born in London, New York was Bowie’s home on several occasions and was his home for the last 22 years until his untimely passing due to cancer. Last week, just a day before his 69th birthday and the release of his last album, ‘Blackstar’, he released the video Lazarus saying goodbye to the world in one of the most poignant videos ever. He was a class act until the very end.

“Look up here, I’m in Heaven, I’ve got scars that can’t be seen” opens the video and song, Lazarus by the late David Bowie.

He was battling cancer for the past 18 months but alas the scourge has claimed yet another life too early on its journey.

Lazarus, and indeed his album Blackstar, takes on an entirely different meaning with his death today.The song is from his last album, Blackstar, which was released on Friday, the day of the icon’s birthday.

UPDATE: According to the Telegraph:

The producer of Blackstar confirms David Bowie had planned his poignant final message, and videos and lyrics show how he approached his death”

The entire song and video can be seen as that of a man suffering and resigned to his fate which he can’t escape—thinking that this was his way of bidding the world adieu isn’t so far out considering the type of artist David Bowie was on the world stage.

In one version of him he’s on what can be interpreted as his death bed and in his other incarnation he’s scribbling fast with such urgency in a notebook like a man running out of time.

The London born New Yorker who was married to supermodel Iman for the past 22 years, has left an indelible mark in the world of pop culture and his influence will be felt long after his departure.

In Lazarus, he ends the song by singing:

“This way or no way
You know, I’ll be free
Just like that bluebird
Now ain’t that just like me 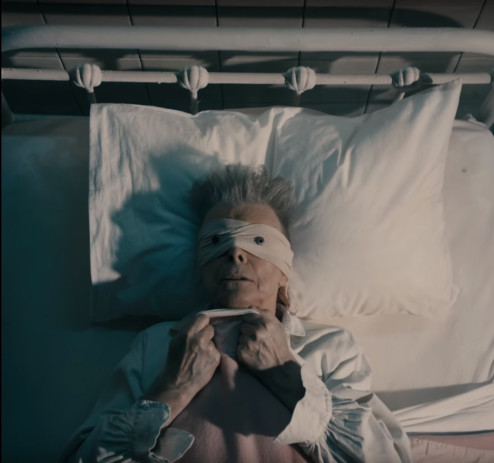 Here’s to you, Major Tom, Ziggy Stardust, The Goblin King and so many other names. You never stood still, your image and style ever-changing almost afraid of stasis.

Iconic History Channel Sign in The Bronx Permanently Coming Down