After being separated by the horrific policies of the Trump administration a father and son have been reunited in The Bronx after 8 weeks.

Eris Hidalgo Ramírez, the 26 year old Honduran, was taken into custody after crossing into Texas with his 5 year old son.

As part of the Trump’s administration to crack down on undocumented immigrants and illegal border crossings, they were then cruelly separated sending the child thousands of miles away to The Bronx.

According to CNN, the father spent several sleepless nights not knowing what fate had befallen his child.

“I never gave up hope that I would see Jostin again,” Ramirez said. “While I was in detention I felt so helpless.”
That helplessness appeared to have faded Friday afternoon, when the two were were reunited in the Bronx after eight weeks apart. Ramirez, staying with a friend in upstate New York, was driven down to the school where a local organization was caring for Jostin.
“I feel so happy to have him with me again because I feel like I was missing my heart as long as I was without him,” he said as he held his son, moments after being reunited. 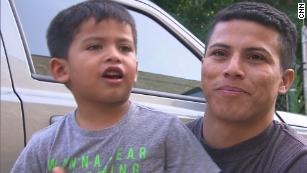 Eris Ramirez and his son were apart for eight weeks before being reunited Saturday.
Ramirez is one of the lucky parents who has been reunited with his child well before the court-imposed July 26 deadline requiring children 5 and older be returned to their parents. The government said in a court filing Friday that there are about 2,551 children 5 and older who are eligible for these reunions.

Now let’s hope that the rest of the families are reunited.