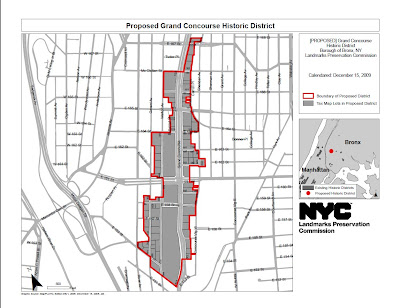 What has been long talked about may soon become a reality – preserving the beauty and historical significance of the Grand Concourse by the Landmarks Preservation Committee.  This is the first step of many that will discuss the pros and cons of landmark status and preserving the historically and architecturally rich buildings of the famed boulevard.  The proposed district which stretches from East 153rd Street up to East 167th Street and incorporates stretches of Walton and Gerard Avenues, which also has quite a few architectural gems, will be the largest historic district in the Bronx outside of the Fieldston Historic District in Riverdale.


Sam Goodman, a long time resident of the Grand Concourse as well as an Urban Planner at the Bronx Borough President’s office recently sent an email which offered some valuable insight into what this means for us and those who live and or own property in the district.  Below is a copy of the email which is used with the permission of Sam Goodman:

“As long as you’re all on line-I have to take this moment to inform you about a plan now being considered by the New York City Landmark Commission to designate the Grand Concourse and portions of Walton Avenue as well as Sheridan Avenue, from East 153rd Street to East 167th Street as an historic district.  My office is currently planning to invite everyone who may wish, to attend a public meeting now being planned for the evening of April 20th to introduce people to the specific details of what an historic designation means, if it were to be approved.  There are both good and bad points.

First, the good points:  No exterior work can take place on any facade or building that falls within the district without specific approval from the Landmarks Commission. Consider the recent facade work at 901 Walton Avenue where the decorative facade was destroyed in favor of simple brick.  This entire block of buildings will be in the new district and as such this designation would have prevented the ugly outcome we now must consider.

No demolition of any building within the District can occur without the approval of the Landmarks Commission.  This virtually guarantees that a developer or the City of New York could not construct a new building that both violates zoning regulations, but also that would alter the overall profile of the existing, surrounding development.  Think about the EAU on Walton Avenue and East 151st Street-this would never be permitted if that area were so designated.

There are tax credits available to property owners who may wish to improve their buildings, but these are credits NOT cash-and they usually do not exceed a modest percentage of the overall investment (I believe the figure is 20%) but please don’t quote me on that one.

The interior of buldings can be altered without review by the Commission unless such modification would impact the exterior of the building-as for example installing ugly steel doors.

As for the negative sides:  While I believe most cooperatives would favor this designation, landlords of rental properties are bound to vigorously oppose it.  If for example, you know that your property (a 5-story walk up that hasn’t seen a dollar’s worth of improvement in 50 years) cannot likely be demolished, you might be tempted to further exploit the property rather than improve it.  A classic case is on Park Avenue at 125th Street.

If you wish to speak to me about this matter, please feel free to call-remembering that I personally support this effort because I believe what the Grand Concourse now offers is not possible to duplicate and would be far too costly to even consider unless many of our neighbors were forced to relocate in favor of transforming our community into something like East 86th Street and Lexington Avenue.  Still, we all need to consider this matter and take part in the process, which ultimately requires approval by the Landmark Commission, the Planning Commission and City Council.

Please also let me know how my office can reach out to the management agencies of many of our buildings to inform them of the meeting in April.  It will likely happen at the Bronx Museum or Andrew Freeman Home.  Finally, there is an historic designation on Morris Avenue between East Tremont and East Burnside Avenues-check it out.

Thanks for reading the considering my comments.

For all interested in attending this very important meeting, it will be held on Thursday, March 11, 2010 at 6:00PM at the Bronx Museum of Art (1040 Grand Concourse) 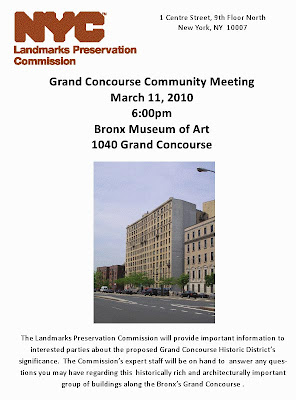 Also feel free to check out the book below, Boulevard of Dreams: Heady Times, Heartbreak, and Hope along the Grand Concourse

, which gives a beautiful history of the Grand Concourse.  I had the pleasure of meeting Constance Rosenblum, author of the book and editor for the New York Times at a book discussion at Hostos Community College back in October.