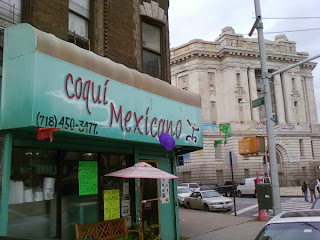 The much loved neighborhood establishment, Coqui Mexicano, has been SAVED! After a court date yesterday to appeal the unexpected eviction notice, community support including letters from local congressman Jose E. Serrano, and Henry Weinstein (owner of the old Bronx courthouse) to name a few, helped save the restaurant from closure.


After much persuasion and the show of overwhelming support from the community, the landlord caved in and generously offered a 6 month payment plan that met the needs of Coqui Mexicano.


News12 the Bronx was at Coqui Mexicano yesterday as well as the Daily News to cover the story which was first heard here and picked up by our friends, the BoogieDowners. The broadcast appeared last night on Bronx Cablevision channel 12 at 10pm.


Furthermore, a writer from the New York Times was there today to write about Coqui after hearing what was going on from welcome2melrose.


So alas, a neighborhood came together to shout out to the world in unison that we were not gonna let one of our own go down without a fight.


A big Melrose THANK YOU to all who came out in support of COQUI MEXICANO! ¡ÓRALE WEPA GÜEY!

Meet the "Mayor" of Melrose at the Bronx Food Summit