Although community organizations have been vocal as to which redesign of the Sheridan Expressway they want, the State of New York will proceed with its own vision which rather than help truck traffic will actually divert it next to parks and community facilities used by children.

NYS Department of Transportation is beyond negligent and disrespectful to the community’s vision of making the Bronx River and parks along it more accessible as well as decommissioning parts of the underutilized Sheridan Expressway to nowhere which was originally supposed to extend to Co-op City.

Rather than building ramps at Oakpoint from the Bruckner and directly into the industrial heart of Hunts Point, thus avoiding the residential areas, NYS has chosen to proceed and build the ramps at Edgewater right next to the residential portions of a neighborhood long suffering from environmental injustices.

The Edgewater ramp would divert traffic onto Edgewater Road right next to the residential core and trucks would barrel down the road making it difficult for residents and children to get to Hunts Point Riverside Park, The Point Campus, and Rocking The Boat.

In a borough where we are constantly being shafted with top down decisions without following true community vision, this decision is not just irresponsible but unacceptable.

The South Bronx River Watershed Alliance, a coalition of Bronx-based organizations, issued a scathing press release today on the matter.

Adam Green, Executive Director of Rocking the Boat said, “Over 4,000 young people and community members come to Rocking the Boat each year to build wooden boats, learn to row and sail, and restore the Bronx River. Every one of these people must cross Edgewater Road to get to us.”

Green added, “As it stands, the constant truck traffic whizzing in front of our building on Edgewater Road –leading to reduced air quality and never ending noise pollution –creates a major safety issue for our students. The prospect of an even larger thoroughfare, designed specifically to funnel truck traffic onto Edgewater Road, is devastating.”

“The South Bronx deserves better. South Bronx neighborhoods have historically been excluded from planning decisions that have been catastrophic for our health and the local environment. We have some of the highest asthma rates in the country due to the highways that divide our neighborhoods. We lack open,green spaces and suffer from dangerous pedestrian conditions due to decades of funding neglect for infrastructure improvements. We deserve and demand to be part of the decision-making process. We demand Oak Point and Leggett ramps to be put back on the table.” said Angela Tovar, Director of Community Development at The Point CDC, member of SBRWA.

These community voices are the ones who have to live with these decisions that NYS is making, not Cuomo or the State who’s pushing for these.

It’s our children, not theirs, that will have their health and lives endangered. We already have the worst health outcomes in the entire state so why are we not doing things like the community back planned to ameliorate some of the situations surrounding asthma which also contribute to cardiovascular diseases?

Jessica Clemente, Executive Director of We Stay/Nos Quedamos which is a member organization of the South Bronx River Watershed Alliance echoes these sentiments on how the our communities are continuously ignored on what we need. 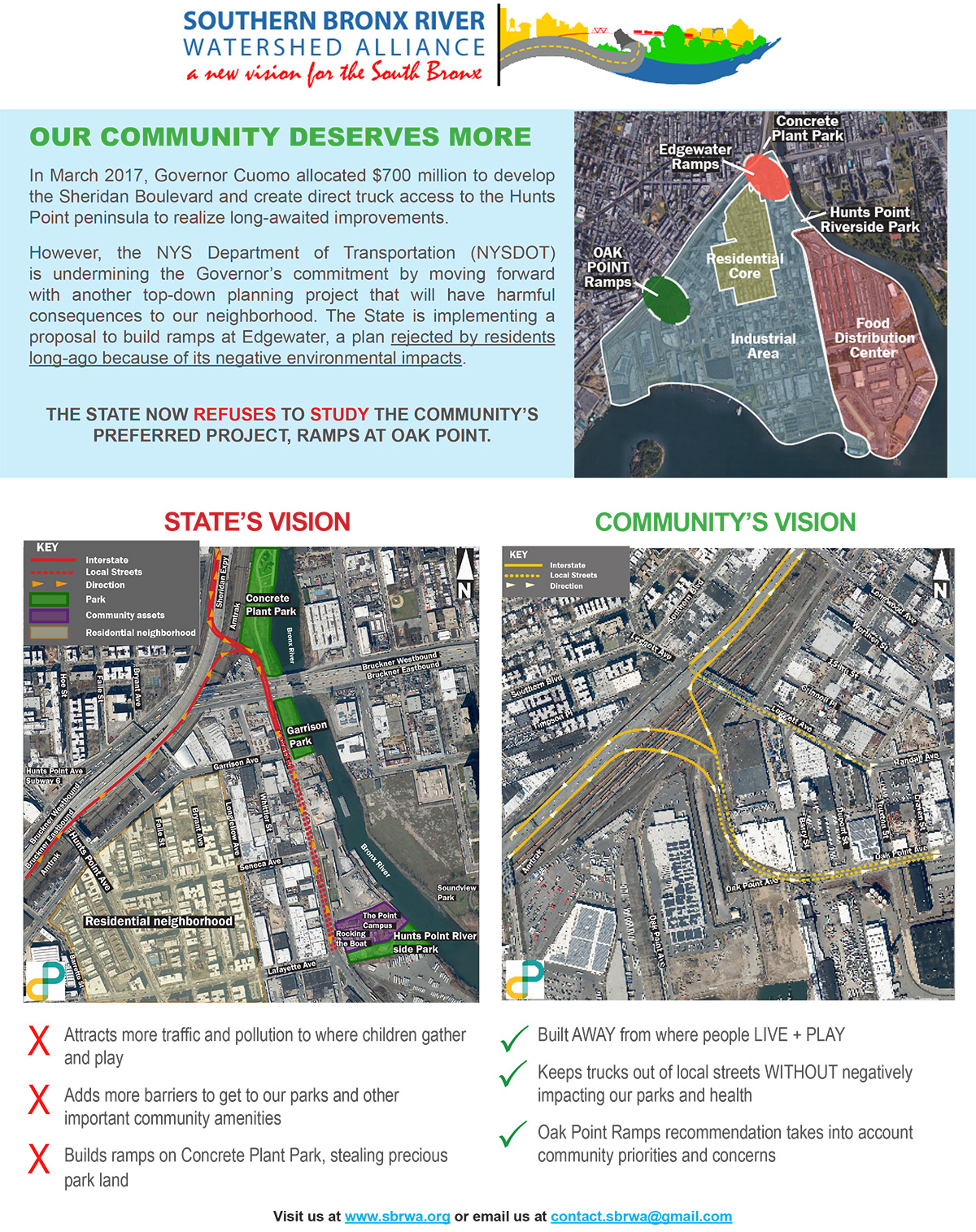 “After failing this community for 20 years and closing the project against our wishes in 2012, NYSDOT certainly seems to be in a rush to push through its own version of the plan.What’s worse, they have provided virtually no information about the reasons for their decision –the Scoping Report lacks basic citations and requests for additional information have been ignored” said Clemente.

Elena Conte who is the Director of Policy at Pratt Center for Community Development said, “This is a once-in-a-lifetime, multi -billion-dollar project that is an opportunity for the Governor to undo a legacy of racist planning. There’s no excuse not to get it right. NYSDOT’s process thus far has failed basic transparency and public engagement standards, adding insult to the injury of the mistakes of the past.”

Conte also added that this is a chance for Governor Cuomo to make things right for low-income communities of color that are often ignored and bear the brunt of environmental injustices. “We are calling on him to do so by requiring NYSDOT to provide basic data to the public and to take a hard look at alternative ramp alignments.” she said.

We know this is an election year and although we hate pandering, this is something Cuomo can get behind and do right by the people of Hunts Point and the South Bronx.

Some more background information from SBRWA is available below from their press release:

In 2010, New York City received a $1.5 million federal planning grant to study how changes to the South Bronx’s transportation infrastructure could improve neighborhood living conditions through a sustainable housing, land use and zoning plan. Hundreds of stakeholders including residents, advocates and businesses, participated in an extensive planning process that resulted in the 2013 Sheridan-Hunts Point Land Use and Transportation Study (SEHP) SEHP provided a series of recommendations to transform the Sheridan Expressway corridor into a pedestrian-friendly boulevard and creates direct access to the Hunts Point Distribution market by building ramps at Oak Point and Leggett.

After twenty years of advocacy and consensus building by local stakeholders, in 2017 Governor Cuomo announced the state would finally invest $1.8 billion to realizing long-awaited improvements, allocating $700 million in the 2017-18 NYS budget towards these initiatives. These investments provide a rarely seen opportunity to provide transformative change in a community that has been overburdened with the cumulative health impacts of environmental hazards. However, NYSDOT’s decision to remove alternatives from environmental review and dismiss widely accepted plans raises questions.

The final Project Scoping Report contains limited detail and lacks standard analysis to explain the State’s decision to cut out five alternatives from being studied. Four of these alternatives were not presented to the public until the final report. The final scope references data without citations and source materials and does not include basic information such as the exact location of impacted properties or businesses. SBRWA requested data at the June and September 2017 Scoping Meetings, at meetings in November 2017 and February 2018, and in writing. No official response has been received.

The community is calling on Governor Cuomo to re-open the scoping process and mandate that NYSDOT study all design scenarios through the environmental review process and use additional scrutiny in their analysis given the long history of environmental justice issues in Hunts Point.

New Burlington Store Opens on Third Avenue at The Hub