The following was originally published over at Hidden Waters Blog, a companion blog to the amazing Hidden Waters of NYC book by Sergey Kadinsky, and reprinted with permission.

Among the streams feeding into the East River that flow through the Bronx, Pugsley Creek is obscure, with little information available on its history. All that remains of it today is an inlet of the East River that used to penetrate much further inland. 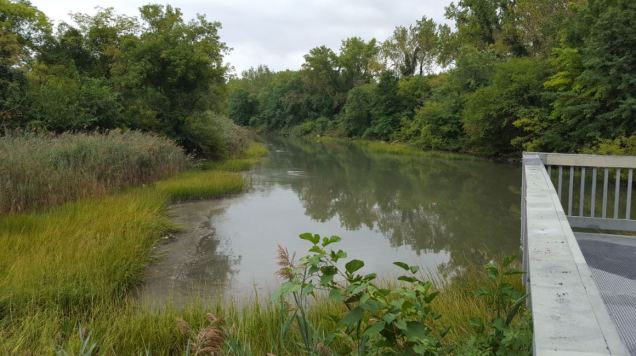 The present head of this stream is deep inside Pugsley Creek Park, a 50-acre sanctuary of plants and wildlife separating the Soundview and Castle Hill neighborhoods. 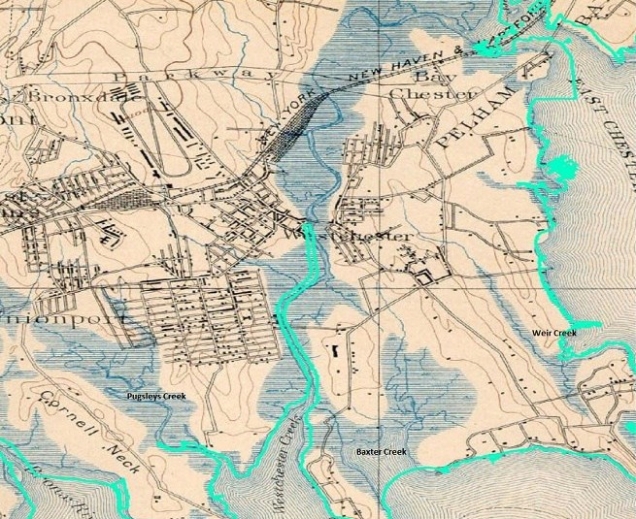 Prior to urbanization Pugsley Creek originated from several sources in the Soundview section of the Bronx, gathering together into a winding stream that widened into a salt marsh on its way to the East River. The route of Soundview Avenue predates the street grid, running atop the spine of Cornell’s Neck towards Clason Point. As with these two names, Pugsley was a landowner in this area in the 19th century. The name also appears on Pugsley Avenue that runs through the area. On the neck between Pugsley Creek and Westchester Creek, today’s Castle Hill appeared on the 1891 Joseph Bien map as Unionport. Its grid would eventually cover much of southeastern Bronx. 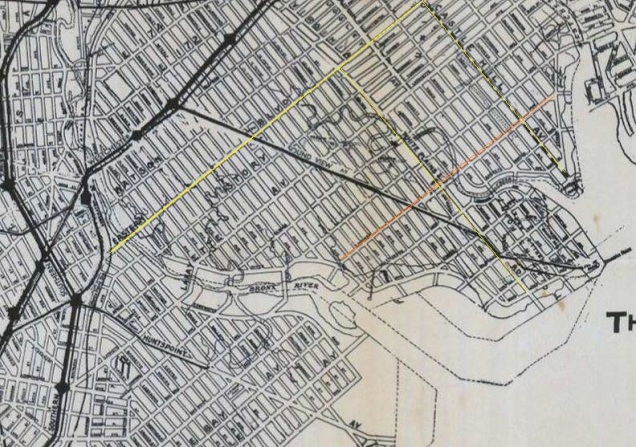 The 1941 Barkan Street Directory map shows the planned grid in its entirety mashed with the natural courses of Bronx River, Pugsley’s Creek and Westchester Creek. A trolley line runs down Soundview Avenue and the elevated subway line atop Westchester Avenue. In yellow I marked Eastern Boulevard, the forerunner of Bruckner Expressway, which touches the headwaters of Pugsley Creek.

Using the aerial surveys available on the DoITT NYCity Map, I compered the landscape around Pugsley Creek in 1924, 1951, and 1996. Lacombe Avenue, which today marks the innermost extent of the stream is marked in yellow. What was a rural retreat of farms and amusement parks in 1924 was being filled in 1951 in anticipation of development. On the east side of Ferry Point, Baxter Creek Inlet was entirely filled in favor of a proposed beach. Instead the landfill here lay unused until the Trump Organization stepped in to clean it up in favor of a golf course.

By 1996, Pugsley Creek assumed its present shorelines. On the inland side of Lacombe Avenue are superblocks atop the landfill that host Adlai E. Stevenson High School and its athletic field, Stevenson Commons apartments, and P. S. 182. 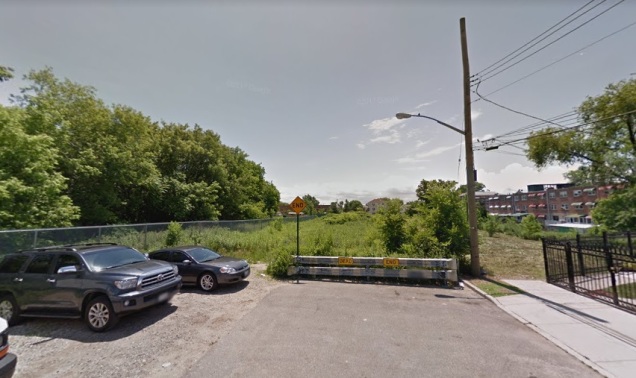 Since 1996 the empty lots atop the filled creek have been covered by residences but on Bolton Avenue there’s still an undeveloped block whose presence relates to Pugsley Creek. 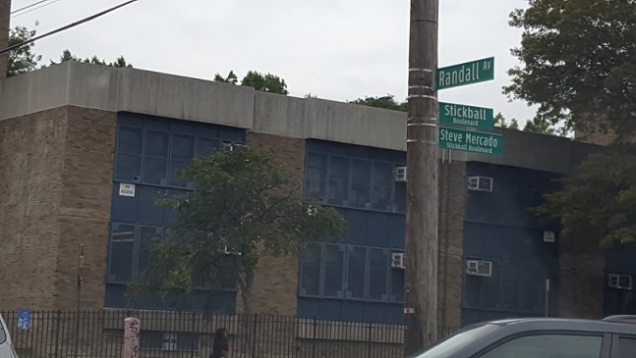 On this expanse of superblocks the former Newman Avenue is marked as Stickball Boulevard. During the summer the street is closed to vehicles on Sundays and reserved for “poor man’s baseball” of a sawed-off broomstick and Spaldeen handball. The sport dates to the prewar years of the inner city, before the eponymous Stickball Boulevard existed. The street is co-named for stickball aficionado Steve Mercado, a firefighter killed on 9/11. 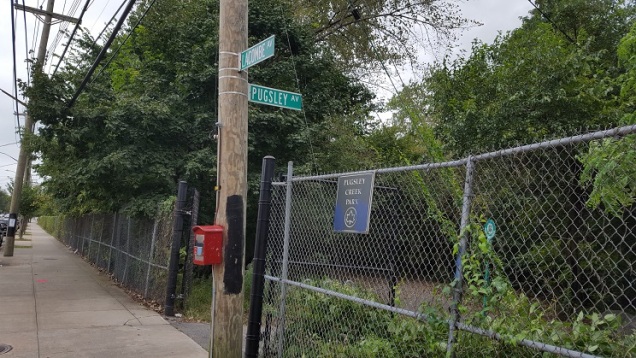 The acquisition of remaining land along Pugsley Creek Park into a park occurred in piecemeal fashion. A trail was dedicated in this park in 2009. There is not much else to do here besides biking, walking and bird watching. The entrance to this trail is on Lacombe and Pugsley Avenues. 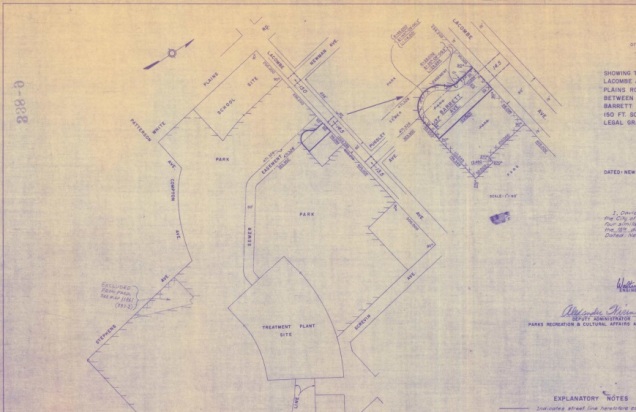 One more map: a 1975 planning chart that shows the park’s borders. Note the dead-end knob off Lacombe Avenue. That’s a piece of Barrett Avenue with a couple of addresses on it that was developed while everything around was empty. That’s how this piece of Barrett was preserved while the rest of this mostly planned street was demapped and absorbed into the park. At the head of Pugsley Creek were a proposed sewage treatment plant. It was instead built at Hunts Point. 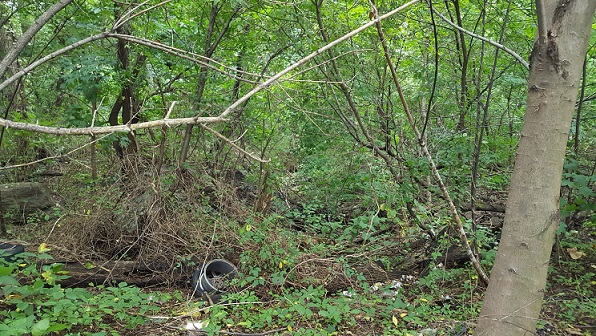 Inside the park it is easy to spot where the stream flowed in the form of ravines. Unfortunately there are still too many discarded tires and shopping carts littering this “forever wild” preserve. 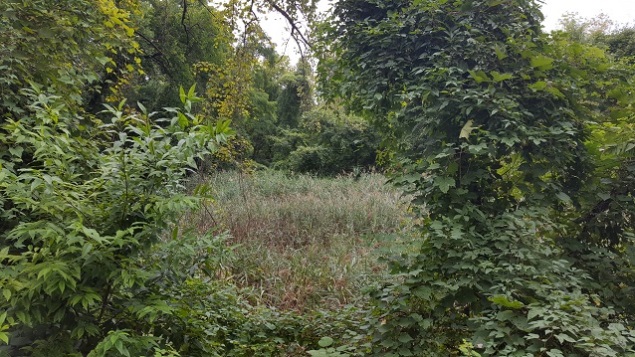 The vines and tree branches of the ravine widen into a salt marsh that floods in high tide. salt marsh cordgrass and phragmites are the dominant plants here. Is this land or water? Between the two categories, this is a wetland.

In turn the salt marsh widens into a visible stream. At sea level this surface section of Pugsley Creek is really an extension of East River with little water flowing into from the historic Pugsley Creek watershed. There is one Combined Sewer Outfall (CSO) pipe that discharges into the creek in the event of heavy rainfall. 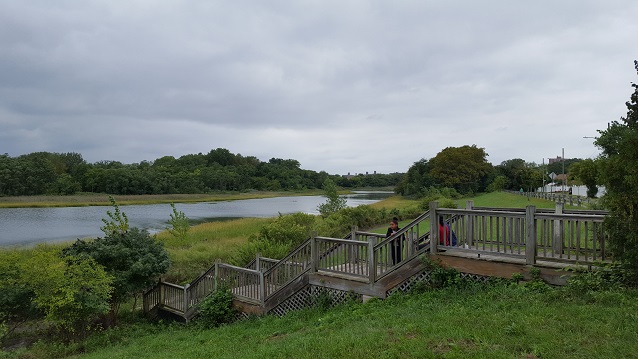 Near Castle Hill Point is a scenic staircase descending to the creek. Such a structure is more recognizable on an upscale waterfront estate but this is a public park and anyone can sit on its steps and admire the view. Behind the stairs is Pugsley Creek Park and in the foreground is Castle Hill Park. 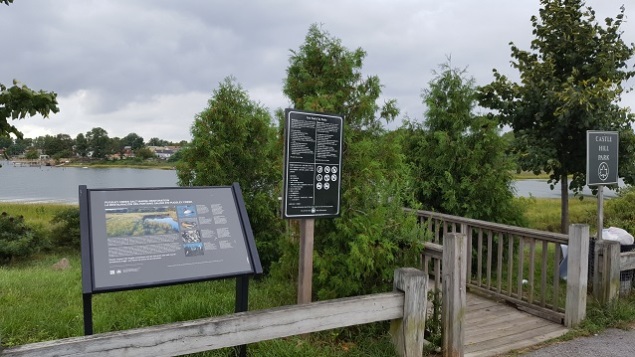 Best of all, the entrance to this staircase includes an informational sign about the creek and its native wildlife. The sign depicts the native wildlife: canvasback duck, fiddler crabs, ribbed mussels, and snowy egrets. The sign was installed as part of a city-state salt marsh restoration project during the Bloomberg administration. Between 1928 and 1985 land at the tip of Castle Hill was the site of Castle Hill Beach Club. Like nearby Shorehaven, this was a private resort that had a sizable pool but did not have an actual beach on the creek. 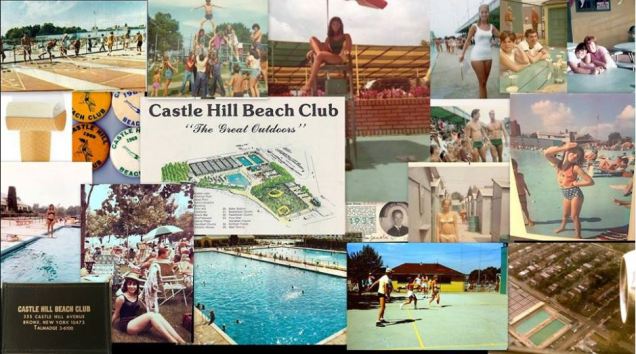 On Facebook former members of the club share photos and memorabilia spanning three generations. Above, group administrator Marc Miller made a collage for Castle Hill Beach Club. By the time that the club had closed in 1985, Pugsley Creek was sorely in need of restoration as runoff and illegal dumping had degraded the once-pristine waterway. At the turn of the millennium the site of the club was developed as tract housing, giving a suburban look to this corner of the Bronx. 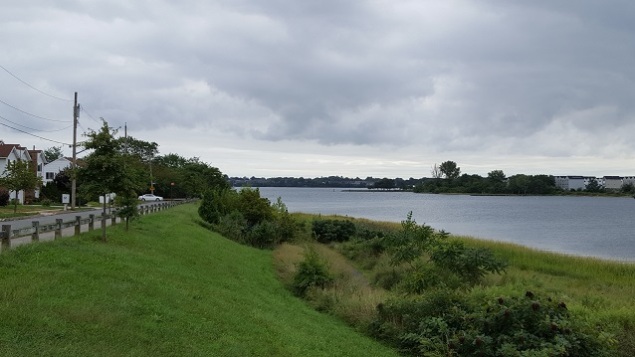 In the view above towards the tip of Castle Hill, we see the East River and Clason Point on the right side. Across the East River in the background is Queens. On the eastern side of Castle Hill Point facing the mouth of Westchester Creek, the Bronx YMCA maintains its waterfront presence. Like old beach clubs nearby, it also had an outdoor pool overlooking the East River. To continue along Westchester Creek, you can read my history article on it, or Nathan Kensinger’s Curbed photo essay on the stream.

Sergey Kadinsky is an analyst at the New York City Department of Parks & Recreation and an adjunct professor of history at Touro College.

He is a licensed tour guide who paid his way through college atop the double-decker Gray Line buses.

Kadinsky is a contributor to Forgotten New York, a local history website. His articles on the city’s history appeared in New York Post, New York Daily News, and Queens Chronicle, among other publications.

Developer Eyes on The Bronx: Construction Boom Pushes Melrose to the Top